Welcome to Brew Diaries, where we challenge ourselves to brew something delicious over the weekend.

The trusty but often misunderstood french press was my brewing vessel this weekend and the challenge was to brew a tasty iced black coffee.

My plan was to supplement some of my brewing water with ice, then pouring my concentrated brew directly over the ice which will cool it rapidly and dilute it to a more palatable strength.

Traditionally I like to brew my french press for quite a long time, 15 minutes or so, allowing the sediment to settle at the bottom and create a slightly cleaner cup. I quickly discover this is not an option as the long steep time causes the brew temperature to drop and then it wouldn't melt the ice and I would be left with a weird strong, tepid brew and a hunk of ice floating in it. I ended up settling on a total brew time of 8 mins, this allowed enough of the sediment to settle whilst also keeping the brew hot enough to melt the ice. I also ground a little finer and stirred quite vigorously at the start to really encourage extraction. 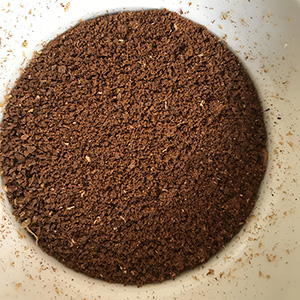 I ground a touch finer than normal.

Pour directly onto ice and stir so it melts quickly

After making a bunch of brews I ended up settling on the following method, the result was a sweet iced coffee that had body and texture but didn't leave a gritty or unpleasant mouthfeel. You can use whatever coffee you enjoy, I ended up using our Daily Grind blend, even though it is an espresso roast I found the added development gave it a really nice mouthfeel and sweetness and helped combat the shorter brew time.

Enjoy guys and let us know how you like to brew cold coffee we would love to hear your recipes, or if you have any challenges for us, shoot us a message!